Naw. I’m not really a skater. I just like the clothes!

You Love Jack says: This hot little alternative dude has got the look but don’t call him a skater. ‘Naw. I’m not really a skater. I just like the clothes.’ Once he’s naked you won’t care either way.

Jeremy’s intensity is burning off the screen as he pulls his rock hard cock out of his pants and shows it off. Teasing the camera as he slowly rolls the foreskin up and over the sensitive skin of his cock head. His eyes are locked on the camera as he falls into the sexual trance of pure desire and the world slips away. read more

I only like girls so I’m not doing anything gay!

You Love Jack says: This humpy straight dude is 100% straight but he doesn’t mind a bunch of gay guys watching him get off. ‘Ya I’ll jack off for you, but listen. I only like girls so I’m not doing anything gay.’ Fair enough, now bend over.

He’s playing with his rock hard uncut cock inside his long johns as the video opens. His hefty tool is poking at the thermal fabric and begging to be free so he reaches in and gives his cock a couple of strokes before pulling it out. He strips bare naked and shows off his beautiful uncut tool and even spreads his cheeks to show off his virgin straight asshole. read more

You Love Jack says: This uncut straight dude prefers fucking chicks but he keeps a couple of guys on the side. ‘I’ve got no problem doing guys, as long as they realize they’re getting fucked then getting out!’

Straight or not – Vinnie is one sexy mother fucker! His rock hard uncut cock is poking at his pants and begging to be free so he pulls it out and shows off all 8 beautiful inches. Staring down at the camera with the devil in his eyes as he slowly works the foreskin up and over the sensitive skin of his cock head. read more

You Love Jack says: One look at Billy Clark’s baby face and thick cock and I don’t see anyone turning this guy down. He grabs a seat on the couch and starts pawing at his crotch with a devilish little grin on his face.

Eyes sparkling as he feels his thick 7 inch cock growing in his pants. He slips his jeans off and shows off his rock hard pecker poking at his underwear.

The thick shaft clearly defined against the thin fabric of his boxers as his cock head pops out of the waste band. He pulls his underwear down and holds up that magnificent cock for the camera’s approval. read more

You Love Jack says: Young boy Billy Clark’s eyes sparkle as he feels his thick 7 inch cock growing in his pants. He slips his jeans off and shows off his rock hard man meat that’s been tenting his underwear.
The massive thick shaft is clearly defined against the tight fabric of his boxer shorts, his cock head just peeking from the top of the waistband.
He slips down his sexy undies and takes ahold of that magnificent throbbing cock. Fucking A that dick is super thick.
Billy slowly jerks his cock slowly then harder before scooting towards the couch and pulling his feet up to show off his straight tight virginal asshole.
Billy continue teasing and wanking till he’s on the edge of his orgasm. Then he just lets rip with a stream of hot cum spurts across his chest and abs. What a messy pup. Lick Lick. read more

Blake shows off his virgin asshole!

Nathan Green pushes his pants around his ankles! 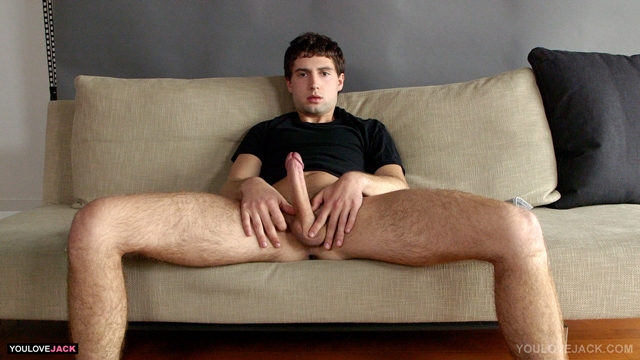 You Love Jack says: Nathan Green pushes his pants down around his ankles and flops back on the couch with a youthful arrogance that demands attention. Holding his cock straight up and looking dead in the lens with those sultry brown eyes as if to say, “Why aren’t you sucking it already?” Damn cute! He kicks off his pants and pulls his legs up to reveal his puckered little asshole. Spreading his cheeks wide to show of his most private entrance as he holds up his boner. Randy desire centralized and ready for service. read more

You Love Jack says: Andrew Elliot’s packing a massive 8 inch cock that’s thick enough to choke a goat but don’t get the wrong idea… This scruffy twink is all bottom. He pulls his legs up and exposes his hungry asshole to the camera’s unblinking eye before stuffing it full of a transparent butt plug.