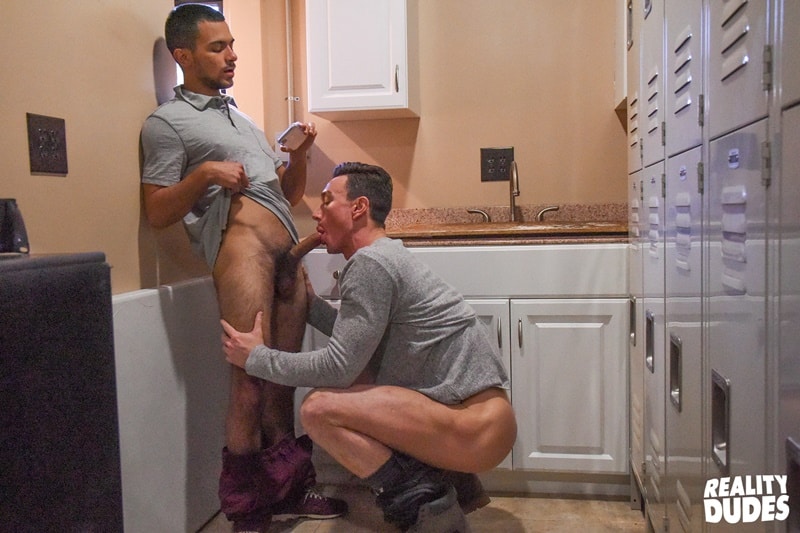 Reality Dudes says: Cade Maddox and Gabriel Isaacs can’t seem to catch a break when it comes to satisfying their “public needs”.

After being caught twice, they find a little corner to finally get it on. The two waste no time going down on each other’s big dicks before Cade decides to plunge his massive cock deep inside Gabriel’s tight ass. read more

The party isn’t over until Carter Michaels and Gavin Taylor’s cum-lust is satiated!…..

Reality Dudes says: Carter Michaels is getting this party started and Gavin Taylor is invited. The bar-keep isn’t too keen on hosting a fuck fest but these two can’t contain themselves.
The party isn’t over until Carter and Gavin’s cum-lust is satiated. This bar’s patron’s will have some juicy stories to tell. read more

Reality Dudes says: Butts are in full bloom in this flower shop and method of payment is highly negotiable.

Justin Dickson sees something special in Brent Walker who is the last patron on of the night.

There is nowhere in public where Manuel Skye and Kit won’t get down to a bit of dirty public sex!……

Reality Dudes says: Why miss out on an opportunity to get some quick and dirty action? Manuel Skye and Kit make the most of their time while waiting for a massage by blowing each other right in the waiting room.

Manuel and Kit keep getting more and more bold, taking things to the next level while staff and patrons remain oblivious. read more

Reality Dudes says: This garage is about to get lit. Alex Fortin is busy repairing a motorcycle, but Thyle insists it’s his body that needs a work over. While the coast is clear, these hard bodied babes get down to sucking and fucking.
And when another mechanic shows up they see no reason to stop. How long can they get away with this greasy garage fuck? You’re sure to blow your load before you find out. read more

Reality Dudes says: Jackson is a sweet southern boy with a cute face and a runner’s body. But don’t let his shyness fool you, Jackson drives a hard bargain.
It was definitely worth the extra time it took to convince him to loosen up for me. His inhibitions dropped once the money started flowing and when we were in private he and his big dick were all mine. read more