Raging Stallion says: Tommy Defendi presses Shawn Wolfe’s calves against his granite pecs while relentlessly burying the bone. Shawn’s desire is quenched swallowing the load built up in Tommy’s balls as he spews his own seed across his torso. 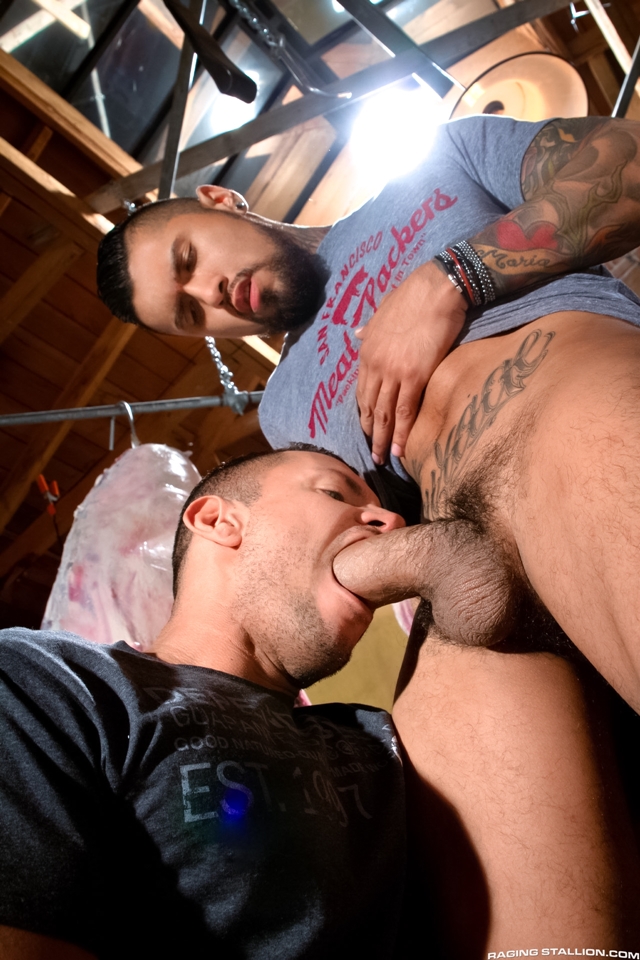 Boomer whets his appetite by licking the ass juice off Angelo’s fingers! 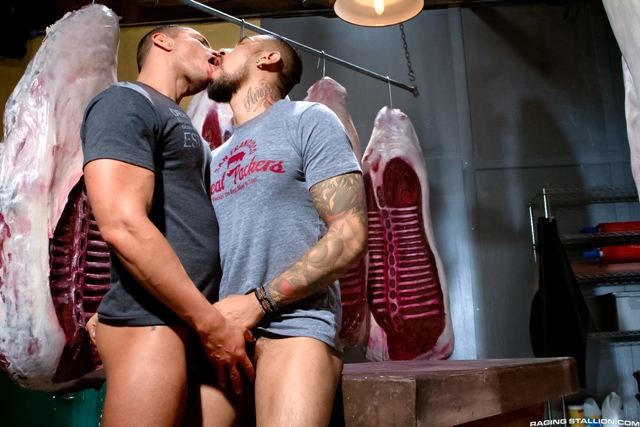 Raging Stallion says: Angelo Marconi’s fingers and Boomer Banks’ tongue compete for space in the tight chute, and Boomer whets his appetite by licking the ass juice off Angelo’s fingers. Angelo has no problem accommodating such a massive slab of meat and his cock thickens perceptibly.

Raging Stallion says: Chasing dangerous fugitives is tense, stressful work, and sometimes the only thing ‘Bounty Hunters’ can count on is their partners. Especially when you’re on the trail of a hardened drug runner. When Lorenzo Flexx and Jay Landford discover their plan to take down their mark leaves them with a few hours of alone time in a ratty motel room, barely repressed passions boil to the surface.

These gorgeous men surrender fully to their forbidden desires; going from stressed out hunters of men to sweaty sex gods the minute they shed their gun holsters. They’re desperate to give each other that special kind of raw, relentless pleasure a man who chases danger can only get from the guy who always has his back. read more

Raging Stallion says: Outside, by the pool, Link Parker and Cain Marko are making out and stroking in the sun.

Link climbs on top to tease his hole and brush against Cain’s fat hard prick, then Cain crouches down to gobble up Link’s ginormous cock.

Edji Da Silva joins the party and Link greets him with a friendly, ‘Well, Hello There! Sexy Daddy!’

Edji piles on and climbs in, polishing Link’s knob while Link gets a face full of Cain’s majestic cock.

Schlongs to the sky and assholes in the air, the three switch around and keep you guessing who’s gonna do what to whom, and just who’s gonna go first? read more

That’s Daymin’s cue to get on his knees to take Drake’s thick hairy cock down his throat. He services Drake with an urgency, getting the rough and tumble muscle hunk hard as a rock. Daymin needs a taste of Drake’s hairy asshole and bends the stud over to spread his cheeks. read more

Raging Stallion says: Tegan Zayne and Hector de Silva meet up in nothing but their bath towels at the clothing optional spa. Without wasting time, the hunks swap some quick spit, skip the foreplay and head right to the dick sucking.

Tegan is the most cock-hungry of the two and gets on his knees to get his greedy face stuffed with Hector’s super hard cock. As Hector gets harder, his instincts take over and he fingers Tegan’s hairy hole until it’s open and ready for more.

Tegan can’t wait to get Hector’s monster up his ass and he mounts up on the stud to ride him hard. Tegan always needs it deeper and harder and after riding Hector’s pole, he lets the hunky stud take control and fuck him on his back. read more

Raging Stallion says: Rikk York has just beat his sexy online gayming opponent, Spencer Whitman, when Fernando Del Rio comes in the room. Fernando is a bit jealous of Rikk’s online counterpart and Rikk does everything he can to appease Fernando.
To help the situation, Rikk starts with a long, passionate session of making out with lots of heavy petting. Fernando needs a dick in his mouth and pulls Rikk’s thick throbbing cock out and immediately gets it down his throat.
He sucks the big uncut dick, spitting and slobbering as he goes until Rikk is rock hard. Fernando loves the taste of a nice hairy asshole and bends Rikk over to get what he needs. Fernando takes his time with the wet hole and enjoys every second of the long and deep rim job.
The taste of Rikk’s hairy ass makes Fernando rock hard and soon he’s enjoying the inside of Rikk when he plunges his thick staff balls deep into the stud. ‘Fuck me harder,’ Rikk begs as Fernando builds to a steady ass-slapping rhythm.
After getting his butt stretched wide open, Rikk wants in on the action and the two hunks switch it up when Fernando bends over to let Rikk inside. Fernando’s ass feels amazing and Rikk can no longer hold off. He pulls out and sprays his load all over Fernando’s back and hairy crack.
After his release, Rikk wants to make sure Fernando gets his happy ending and immediately gets down on his knees to finish his buddy off.
Fernando lets loose and slathers Rikk’s panting face with jizz before they kiss the cum away. read more

Raging Stallion says: Lawson Kane plunges deep into Shawn Wolfe’s hole with a single sudden thrust, eliciting moans of pleasure as he continues with long strokes in and out.
Shawn reaches back to open himself wider, and Lawson encourages Shawn by smacking his ass.

Bracing himself against the pool table Jack Andy takes Michael Roman’s cock from behind!……

Raging Stallion says: In the dark alley outside the local cruise bar, big and muscular Michael Roman makes his move on ripped stud Jack Andy. They kiss passionately, then Jack frees Michael’s bulge from his pants and wraps his lips around Michael’s hard cock.
Kneeling down, Michael returns the favor, tugging on Jack’s balls and slicking up his shaft with slippery spit. The body hair that covers both men catches the light from the bar’s signage. Bending over, Jack spreads his ass wide and Michael dives in face first.
Moving inside the bar, Michael and Jack remove all their clothing (save for Jack’s leather harness) and get down to business. Bracing himself against the pool table, Jack takes Michael’s cock from behind. Putting all the power of his physique into his thrusting, Michael fucks Jack like an uncontrollable sex beast.
Jack gets up on the pool table and throws his leg over Michael’s shoulder. As Michael pounds his hole, Jack strokes his huge cock, getting closer and closer to cumming. Michael’s thrusting is relentless and unyielding. With Michael deep inside him, Jack explodes with thick ropes of cum that drip across his hairy stomach.
Michael grabs his hard meat and blows his load on Jack’s cock and balls. read more

Landon drops to his knees to give Johnny a deep blow job!……

Their sexual chemistry is high octane fuel just waiting to be sparked and ignited. Their cocks crowd their jeans; their lungs can barely sustain the heavy breathing.

Landon smashes their dicks together in a single hard column and jacks ferociously before dropping to his knees to give Johnny a deep blow job. Johnny responds in kind, punishing his throat on Landon’s hot meat. read more