Next Door Male says: Troy Clark has got that All-American look that can be found on college campuses across the country. With an outgoing personality and a nice set of pecs to back it up, he has no shortage of confidence as he strips and strokes for you. read more

Next Door Male says: Raoul is a good natured guy who knows when to turn up the intensity, but also knows how to kick back and just enjoy the good times. An east coast gym rat with aspirations to become a professional body builder, Raoul is serious about his training, and his body shows the fruit of his hard labor, as he flexes his massive arms and chest, straining his chiseled back as he curls a heavy load.
After his workout, Raoul is pumping a different sort of heavy load, as he reclines on the bench and flicks his cock into action, rubbing at its base before flogging it fast & furiously.
Standing up, he flexes his legs, tightening his ass muscles as he stares in the mirror, giving himself a good smack on the cheek and then laying back down on the changing bench where he goes for broke, losing his load underneath the lights of the gym as it puddles up, milky white on his stomach. read more

Robert smacks his ass before he spits his load out all over himself!……

Next Door Male says: Robert Longwood run his hands up from his shins to his inner thighs, his cock twitches as he takes hold of its base. He works the shaft with his thumb and index finger, before grabbing a firm, five-fingered hold and stroking away.
Robert smacks his ass before he spits his load out all over himself in the flickering gym lights. read more

Next Door Male says: Marco Ratillo is a cannonball of energy, barely able to sit still, budding with energy like the spring flowers in bloom all around him. A former gymnast turned body builder, he displays both his strength and flexibility and is quick to come out of his clothes. read more

Aaron wags his big dick back and forth!

Next Door Male says: Aaron Tex thumbs his cock head as it dribbles pre-cum, flashing his pearly whites before licking his lips and commencing action. He wraps his fingers around the base and wags his big dick back and forth, slapping it against his stomach. Whacking himself silly before spitting his load onto his chest in a messy puddle of Texas T, white gold. read more 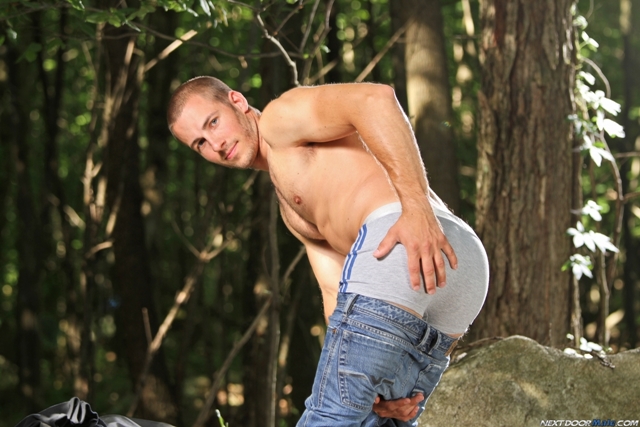 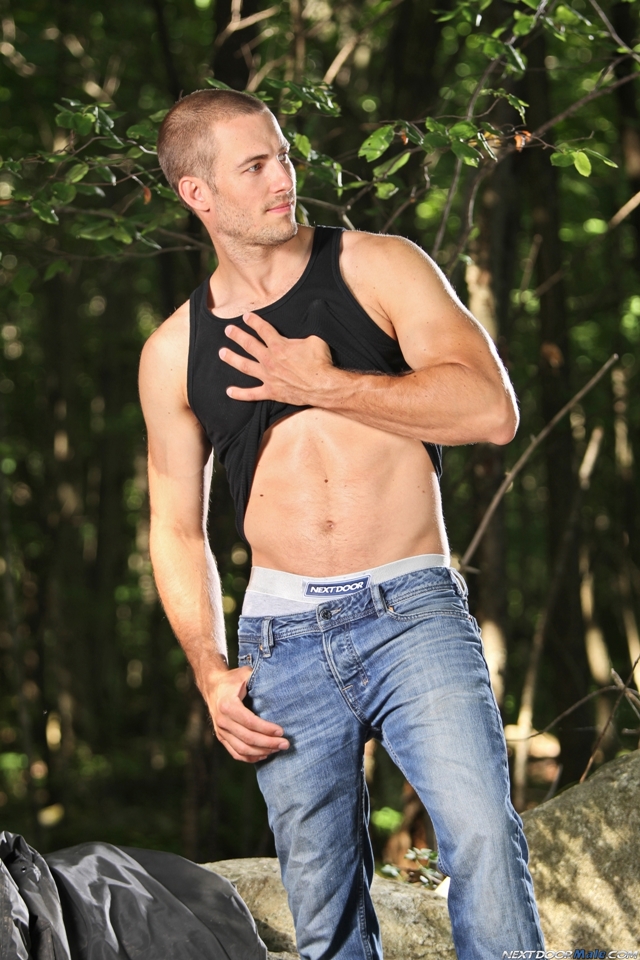 Exploding a natural load all over his stomach!

Next Door Male says: Alexi Auclair is hanging out in the verdant forest, back again for his second shoot with Next Door Studios.

Getting comfortable amidst the foliage, he strips down to a more natural state, and the open breeze swells his cock harder and harder by the second. read more

Ivan James slowly stripping out of his board shorts as he exposes his meaty cock!……

Next Door Male says: Ivan James is a good ol’ country boy from West Virginia who has got the right attitude and a nice package to boot.

Good natured and not too complicated, Ivan’s extroverted personality comes through, as we catch up with him outside, taking in the first rays of summer as he lounges by the pool. read more

Tattooed young stud jerking his fat cock in his swimshorts!……

Next Door Male says: Relaxing on a bench underneath the veranda, in his tight swimwear, tattooed young stud Gill Rohr spreads his legs wide as he strokes his cock. Playing with his big ball, he cocks his leg up for more leverage.
Jerking his big hard cock till be is on the edge of an orgasm. Then launching his huge cumload all over his washboard stomach in the afternoon light. read more

Next Door Male says: He’s a hard-working guy who knows exactly how to unwind. When he gets home from the office, after a long day of meetings, conference calls, and high-pressure deals, Cooper Adams like to relax and enjoy the solitude of his luxurious beachfront home.
He cracks open a beer, loosens his collar, and walks next to the tall windows that allow him to look out over the ocean. The sun is just setting and Cooper watches as it disappears beneath the horizon. He sets the beer down and decides to play with his hardening cock.
At the end of each day, Cooper knows he must jerk his hungry dick to recuperate and prepare himself for bed. He pulls out his swollen meat and squeezes it firmly. It feels so good to have this pleasure after working so hard and for so long.
Cooper retreats to a couch nearby where he loses himself in the ecstatic sensation, becoming fervent in his stroking. He lets his free hand touch his body all over, even tweaking his erect nipples a bit.
Join him as he unwinds and unloads, all in the comfort of his peaceful abode, away from the hustle and bustle of the confusing world to which he knows he must eventually return. read more