Bracing himself against the pool table Jack Andy takes Michael Roman’s cock from behind!……

Raging Stallion says: In the dark alley outside the local cruise bar, big and muscular Michael Roman makes his move on ripped stud Jack Andy. They kiss passionately, then Jack frees Michael’s bulge from his pants and wraps his lips around Michael’s hard cock.
Kneeling down, Michael returns the favor, tugging on Jack’s balls and slicking up his shaft with slippery spit. The body hair that covers both men catches the light from the bar’s signage. Bending over, Jack spreads his ass wide and Michael dives in face first.
Moving inside the bar, Michael and Jack remove all their clothing (save for Jack’s leather harness) and get down to business. Bracing himself against the pool table, Jack takes Michael’s cock from behind. Putting all the power of his physique into his thrusting, Michael fucks Jack like an uncontrollable sex beast.
Jack gets up on the pool table and throws his leg over Michael’s shoulder. As Michael pounds his hole, Jack strokes his huge cock, getting closer and closer to cumming. Michael’s thrusting is relentless and unyielding. With Michael deep inside him, Jack explodes with thick ropes of cum that drip across his hairy stomach.
Michael grabs his hard meat and blows his load on Jack’s cock and balls. 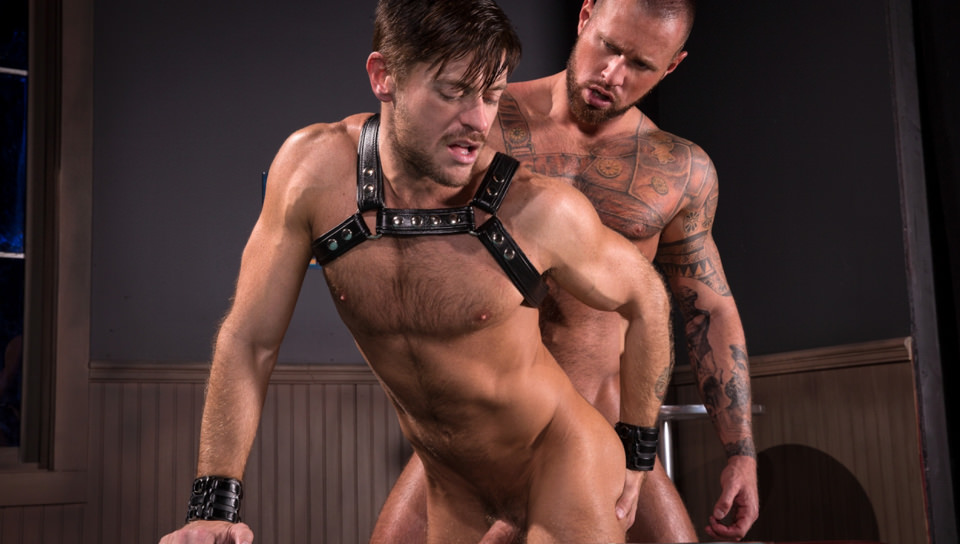